The International Testing Agency (ITA), leading a comprehensive and independent anti-doping program on behalf of the International Olympic Committee (IOC), has finalised the re-analysis of samples that had been collected from athletes during the London 2012 Games. This concludes the re-analysis project that was initiated by the IOC and handed to the ITA in 2018. As a result of this program, 73 anti-doping rule violations were sanctioned leading to the withdrawal of 31 and the reallocation of 46 Olympic medals in four sports.

Re-analysis programs provide an additional layer of doping deterrence and widen the detection scope of possible rule violations beyond the initial first analysis following sample collection. This allows for further testing based on new information, for instance through investigations, or when scientific breakthroughs allow for better detection methods. Thus, the cases uncovered and sanctioned through the London 2012 re-analysis program were mostly for anabolic steroids detected through the new ‘long-term metabolite (LTM) test’, an analytical method that was not yet available during the initial analysis of the samples in 2012.

The IOC began its re-analysis efforts as an extension of the Olympic anti-doping program with samples collected during the Athens 2004 Games, followed by those from Torino 2006, Beijing 2008 and Vancouver 2010. It began the same procedure for the London 2012 samples prior to the Olympic Games Rio 2016, in the context of the investigations into systemic doping in Russian sport. In 2018, following the establishment of the ITA, all re-analysis programs were handed over to the new expert body for independent handling, along with the rest of the Olympic anti-doping activities.

The ITA has now finalised the re-analysis program for London 2012, the most comprehensive of its kind for an edition of the Olympic Games. Ensuring that the program was led efficiently and intelligently, samples were selected according to an extensive risk assessment that considered a variety of determinants, including the physiology of the respective sports, individual factors pertaining to athletes as well as country risk levels and any accessible information stemming from investigations. Based on these risk criteria, a total number of 2’727 samples were re-analysed. Additionally, a new important detection method for anabolic steroids could be applied that was not yet available for the initial analysis of the samples in 2012. This led to additional positive results: most of the 73 anti-doping rule violations stemming from the re-analysis program are due to this scientific advancement. As a direct consequence of the outcomes of the re-analysis program, the IOC has withdrawn 31 medals handed out to athletes that are now proven to have committed an anti-doping rule violation and reallocated 46 medals to subsequent legitimate winners in weightlifting (22), wrestling (4), athletics (18) and canoe (2). 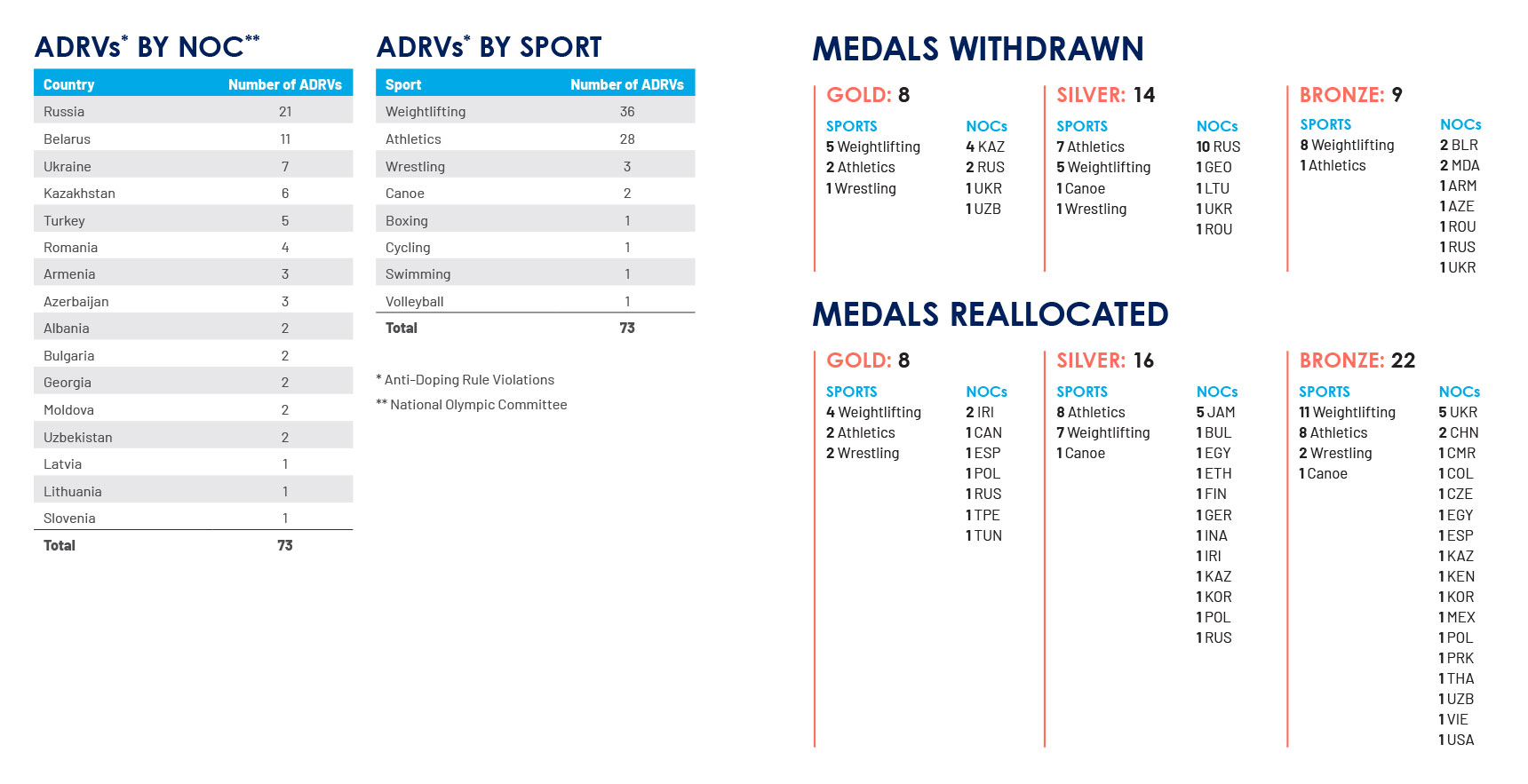 “The result of this re-analysis program clearly shows that in the fight against doping every available means must be used to protect fairness and athletes,” says ITA Director General Benjamin Cohen. “Sometimes, time is one such tool that allows science and approaches to anti-doping to evolve to the point where new detection methods can be applied to samples taken many years ago. That is why the ITA is committed to smart, comprehensive approaches to clean sport. Cheaters should never feel safe, not now, not tomorrow, not in ten years. We will constantly continue to improve our ability to tackle doping from any possible angle, this is the ITA’s determination and mission. Through this work, the ITA and the IOC are working hand in hand to instil the trust in fair play of athletes who were directly affected by doping competitors and only received recognition of their rightful results years later.”

“This completion of this re-analysis program reiterates the importance of safeguarding the fundamental values of sport and the spirit of fair play,” says Emma Terho, Chair of the IOC Athletes’ Commission. “The IOC continuously supports the anti-doping effort and this is an important result of this support. Ensuring the protection of clean athletes is a top priority and on behalf of all clean athletes, I can say we are thankful for this work being done by the IOC and the ITA.” She adds: “If medals have to be reallocated, the Olympic Medal Reallocation principles, which were designed by the IOC Athletes’ Commission and approved by the IOC Executive Board, provide athletes with a menu of options to receive their medals in a way that recognises their achievements. The years of hard work that athletes have put in to reach the top of their sport are recognised properly through these principles, and offer athletes a chance to receive reallocated medals in a way that feels right to them.”

Enabled by a dedicated IOC fund of up to USD 5 million, the IOC has expanded the scope of re-analysis endeavours in the future even further. The ITA has rolled out a large-scale sample long-term storage and re-analysis program in 2020. It has established a Centralised Long-Term Storage Facility (CLTSF) and the necessary logistical strategies to not only store samples collected during the Olympic Games, but also those collected throughout the important phase during the months leading to the event under the authority of all anti-doping organisations involved in pre-Games testing.

The IOC fund is aimed at further strengthening the fight against doping in the long term. This extended long-term storage strategy has already been applied to samples collected ahead of the Olympic Games Tokyo 2020 and the Olympic Winter Games Beijing 2022 and will be continued for future editions of the Games.

Next, the ITA will finalise the re-analysis program for the Olympic Winter Games Sochi 2014. This has already been partially started by the IOC’s re-analysis of all samples from Russian athletes prior to ITA’s establishment. The re-analysis of samples collected during the Rio 2016 Games will begin at a later point in time in order to make sure any new scientific or analytical methods can be applied. The current statute of limitations for sample re-analysis is ten years according to the World Anti-Doping Code.