A TOTAL OF OVER 3’100 COLLECTED SAMPLES FROM 55% OF THE ATHLETE POPULATION AND ALL 91 PARTICIPATING NOCS TESTED AT LEAST ONCE – THESE ARE THE FINAL FIGURES OF THE ITA’S ANTI-DOPING PROGRAM FOR BEIJING 2022. THE WADA INDEPENDENT OBSERVER REPORT, ISSUED IN JULY 2022, CONFIRMS THE HIGH QUALITY OF THE ITA’S CLEAN SPORT EFFORTS FOR THE WINTER OLYMPICS.

During the Games-time anti-doping operations, more than 3’100 samples were collected, approximately half in- and half out-of-competition, from the opening of the Olympic Villages to the Closing Ceremony. These urine, blood and Dried Blood Spot samples stem from over 2’300 doping controls conducted on 1’600 athletes – which means that over 55% of the participating athletes were subject to at least one doping control. Furthermore, and for the first time in Olympic Games’ history, at least one athlete from each of the 91 participating National Olympic Committees (NOCs) was tested over the course of the Winter Games.

These results shows that the ITA was able to build on the experience gained during its mission for Tokyo 2020 and the innovations and strategies introduced for the Summer Games to successfully execute its full testing plan despite the ongoing Covid-19 pandemic and the demanding circumstances that accompanied it. Almost all recommendations concerning the ITA’s area of responsibility from the Tokyo 2020 IO report were taken into consideration and addressed for the Beijing 2022 anti-doping operations.

Proportionally to the size of the ten largest national delegations that participated in Beijing 2022, typical winter sport nations such as Italy, Germany, Sweden and Switzerland were tested most, followed by the three largest delegations participating: the Russian Olympic Committee (ROC), Canada and the United States. Cross-country skiing, ice hockey and biathlon were among the winter disciplines with the most doping controls (please see more details in the infographic below). 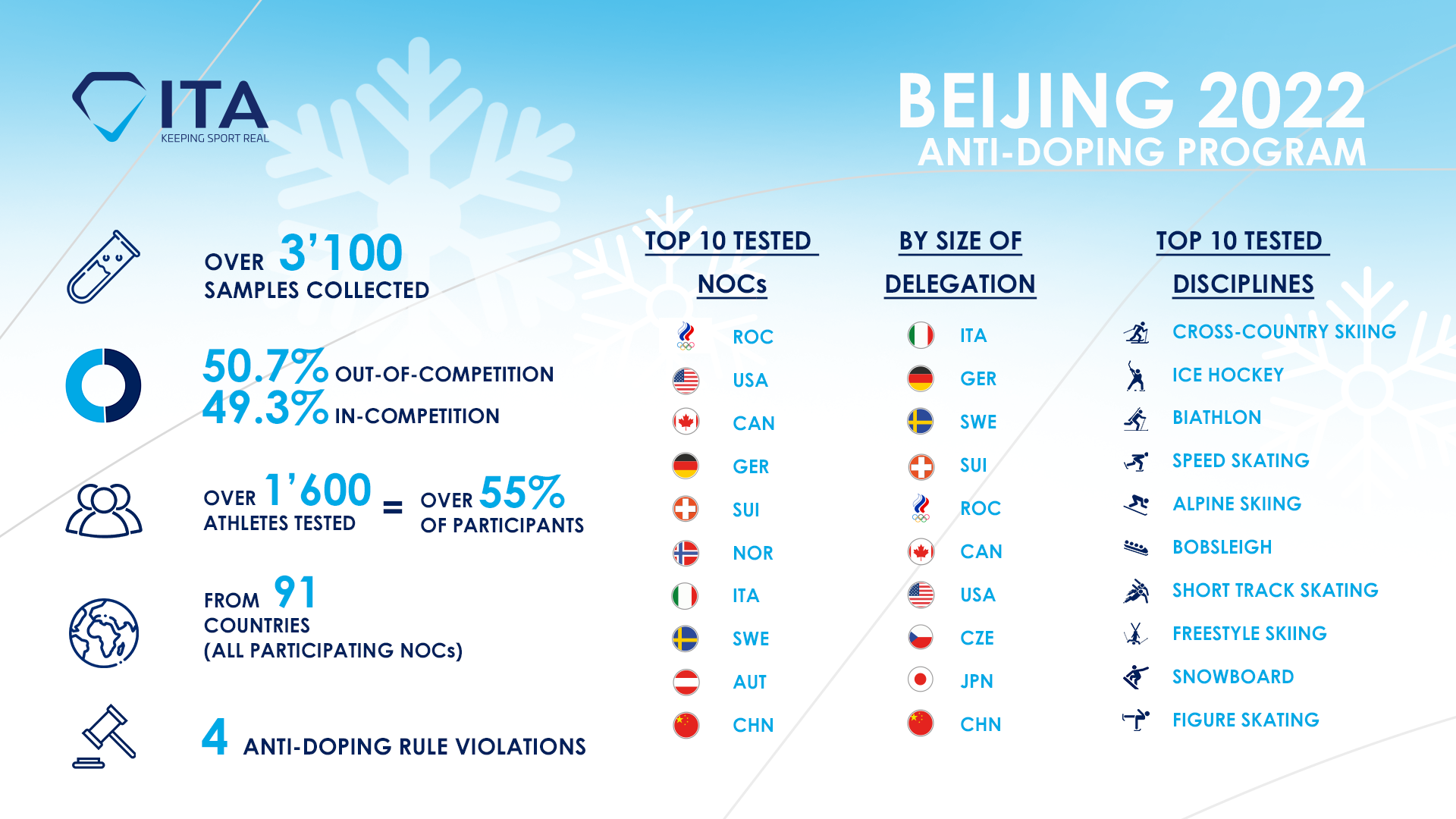 The ITA’s testing strategy relied on an extensive risk assessment that was conducted ahead of the Games and considered a variety of factors, including the physiology of the respective disciplines, individual factors pertaining to the athletes as well as country risk levels. The results of the risk analysis were combined with the recommendations of the ITA Expert Group for the 2022 Beijing Games, performance factors and information received through the ITA confidential reporting platform REVEAL. In addition, the ITA set up a special intelligence task force to coordinate the exchange of information with anti-doping organisations around the world. The vast majority of doping controls were targeted, ensuring that the resources for the Beijing 2022 anti-doping program were used efficiently. In this context, the WADA IO report “commends the ITA for its comprehensive approach to the high level of target testing given the significant amount of work involved”.

For the purpose of information exchange, the ITA had also entered a multi-lateral agreement with Chinese law enforcement and customs authorities and established a multi-stakeholder Intelligence Task Force to promote the exchange of intelligence on athletes, athlete support personnel, delegations, sports that required specific focus in the lead up to and during the Beijing Games.

The Games-time anti-doping operations were preceded by the most extensive pre-Games testing program ever implemented for an edition of the Olympic Winter Games with over 5’400 testing recommendations issued by the abovementioned ITA Beijing 2022 Pre-Games Expert Group and a completion rate of over 80%.

To date, the ITA has asserted four anti-doping rule violations based on results from samples collected in the various venues in and around Beijing. All concerned athletes were provisionally suspended, which resulted in their immediate retrieval from participating in any competitions during the Games. Their cases have been passed on to the Anti-Doping Division of the Court of Arbitration for Sport (CAS ADD) and/or their respective federations for final adjudication. The ITA also stood ready to immediately issue a provisional suspension of ROC figure skater Kamila Valieva for Beijing 2022 when informed of her positive test result for a sample collected by RUSADA several weeks before the Games until it was lifted by the Disciplinary Anti-Doping Committee of RUSADA (DADC). Thereupon the ITA on behalf of the IOC led the appeal proceedings before the ad hoc division of the CAS, which decided to uphold the decision of the DADC. Regarding this case, the WADA IO report calls on all anti-doping organisations to ensure that analytical results of athletes scheduled to attend the Games should be prioritised and reviewed before the start of the event “to avoid, as much as possible, a similar situation occurring in the future”. 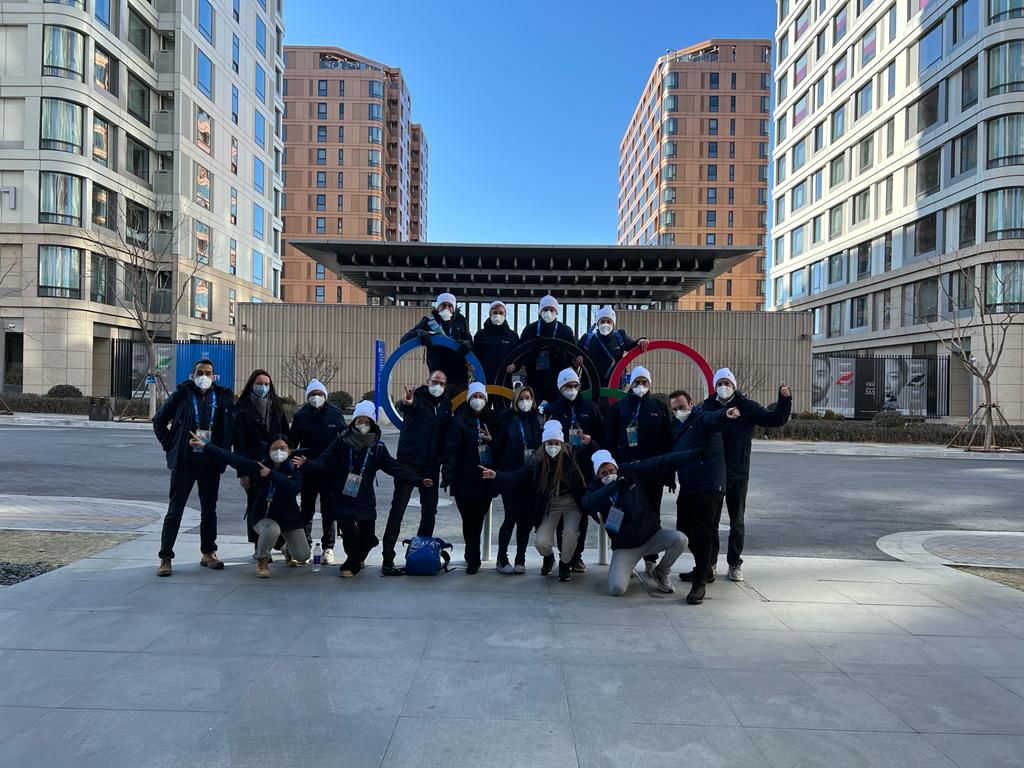 The ITA team on-site in the Beijing 2022 athlete village.

The ITA was present in China with a team of 17 anti-doping experts to oversee the implementation of its clean sport program for the Winter Games and was supported by another 10 specialists working remotely from the ITA headquarters in Lausanne, Switzerland. Around 150 Chinese and international Doping Control Officers performed doping controls, of which all had received the ITA IDCO training and certification in preparation for their mission at this high-level major event. More than 360 Chaperones, all Chinese volunteers, also received dedicated training and were responsible for notifying athletes that had been selected for testing. The ITA operations were supported by the human and logistical resources of the Organising Committee and the Chinese Anti-Doping Agency (CHINADA) as well as dozens of international experts for the implementation of these large-scale clean sport activities. The ITA wishes to thank all individuals and stakeholders that have contributed to the successful delivery of the Beijing 2022 doping control program for their support and collaboration.

Several innovations introduced for Tokyo 2020 could be implemented and further fine-tuned during Beijing 2022, including a paperless administration system for doping controls, a custom rooming application to facilitate athlete whereabouts during the Winter Games, and improved communication with the 91 National Olympic Committees (NOCs) with ADCOM, the ITA’s own support platform. This innovative use of technology for the Olympic anti-doping program was welcomed by the IO team, as it “contributed to very efficient operations”. The ITA, the Beijing 2022 Organizing Committee and CHINADA also introduced for the first time at a major event the sample collection via the Dried Blood Spot method and had samples tested for gene doping as was already the case for Tokyo 2020.

All samples collected during the Winter Games will be kept in the ITA’s Centralised Long-Term Storage Facility (CLTSF) for up to ten years and will be selected for re-analysis at a later point in time if and when technological or scientific developments allow for more advanced analytical methods. As the months leading up to the event were the most critical in regard to doping, the ITA offered to any interested anti-doping organisation the storage of samples they collected during the pre-Games period for free in the CLTSF through a dedicated IOC-fund.

The ITA has already begun its work for Paris 2024, preparing to lead the anti-doping program for its second edition of an Olympic Summer Games.

To the benefit of the athletes: The ITA offers specific training for Beijing 2022 anti-doping chaperones