A total of 6’200 collected samples from over 5’000 doping controls, more than one-third of the athlete population in Tokyo tested at least once – these are the final figures of ITA’s anti-doping program for Tokyo 2020. Six anti-doping rule violations were asserted to this moment as the outcome of ITA’s testing program. The vast majority of doping controls were targeted and followed a quality approach based on an extensive risk assessment, performance and available intelligence. The last phase of ITA’s comprehensive anti-doping program for Tokyo 2020 is the storage and later re-analysis of samples collected during and in the lead-up to the Games.

With the Olympic Games Tokyo 2020 ending over a month ago on 8 August 2021, the ITA now concludes the Games-time phase of its anti-doping program for the world’s largest sporting event. Altogether, 6’200 samples were collected both in- and out-of-competition from the opening of the Olympic Village to the Closing Ceremony. These urine and blood samples stem from over 5’000 doping controls conducted on over 4’255 athletes – which means that more than one-third of the participating athletes were subject to at least one doping control. This outcome shows that the ITA was able to fully carry out its original testing plan established before the spread of the coronavirus pandemic and the postponement of the Games despite the challenging and restricting circumstances caused by COVID-19.

Proportionally to the size of the largest national delegations that participated in the Games, the greatest number of tests were implemented on athletes from the ROC (Russian Olympic Committee), China, the United States, Great Britain and Australia (please find more information in the infographic below). Athletics, aquatics, cycling, rowing and weightlifting were among the disciplines with the most doping controls. Around two-thirds of the tests were done in-competition and one-third out-of-competition. A part of the latter was implemented outside of Japan to mitigate the effects of the shorter stay of athletes in the Olympic Village due to the COVID-19 countermeasures. 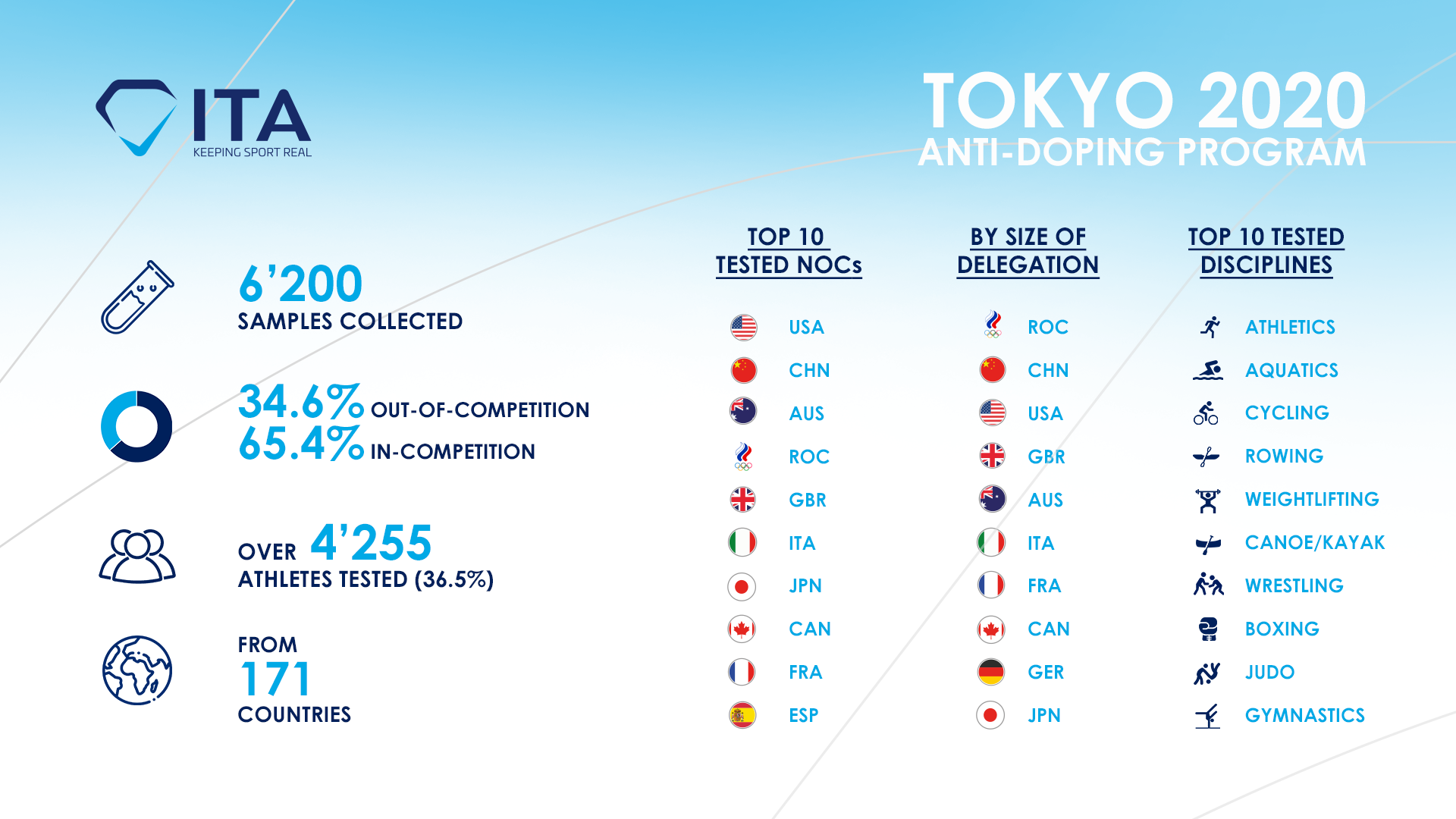 ITA’s testing strategy relied on an extensive risk assessment that was conducted ahead of the Games and considered a variety of factors, including the physiology of the respective sports, individual factors pertaining to the athletes as well as country risk levels. Combined with the Games-time recommendations of the ITA Tokyo 2020 Pre-Games Expert Group, performance factors and intelligence based on information received through ITA’s confidential reporting platform REVEAL and exchange with the Japanese authorities, Olympic Summer International Federations and other anti-doping organisations, the vast majority of doping controls implemented in Tokyo by the ITA were targeted.

These Games-time anti-doping operations were preceded by the most extensive pre-Games testing program ever implemented for an edition of the Olympic Games with over 25’000 testing recommendations issued by the abovementioned ITA Tokyo 2020 Pre-Games Expert Group and a completion rate of over 80%.

To date, the ITA has asserted six anti-doping rule violations based on results from samples it collected in Tokyo. All concerned athletes were provisionally suspended, which resulted in their immediate retrieval from participating in any competitions during the Games. Their cases have been passed on to the Anti-Doping Division of the Court of Arbitration for Sport (CAS ADD) and/or their respective federations for final adjudication. The analysis for banned substances or methods on the 6’200 collected samples by the WADA-accredited laboratory in Tokyo has been finalised.

The ITA was present in Japan with a team of 24 anti-doping experts to oversee the implementation of its clean sport program for the Games, which was carried out in close cooperation with the Organising Committee Tokyo 2020 and the Japan Anti-Doping Agency (JADA). 250 Doping and Blood Control Offers from JADA and National/Regional Anti-Doping Agencies from around the world, 700 Chaperones and numerous other volunteers contributed to the roll-out of these large-scale doping control operations. The ITA wishes to thank all individuals and stakeholders that have contributed to the successful delivery of the Tokyo 2020 doping control program for their support and collaboration.

The ITA introduced several innovations to the Olympic clean sport program for its activities in Tokyo. Next to relying on a paperless administration system for doping controls, the ITA used a self-developed rooming application to locate athletes in the Olympic Village for out-of-competition controls and facilitated communication with the over 200 National Olympic Committees (NOCs) with ADCOM, its own support platform. The new Dried-Blood-Spot method was used for analysis, and gene doping testing was implemented for the first time at an edition of the Games.

All samples collected in Tokyo will be kept in ITA’s Centralised Long-Term Storage Facility (CLTSF) for up to ten years and will be selected for re-analysis by the ITA at a later point in time if and when technological or scientific developments allow for more advanced analytical methods. As the six months leading up to the event were the most critical in regard to doping, the ITA offered to any interested anti-doping organisation the storage of samples they collected during the pre-Games period for free in the CLTSF through a dedicated IOC-fund. To date, over 40 organisations have adhered to the project.

The ITA Beijing 2022 Pre-Games Expert Group has already begun its work to issue testing recommendations for the upcoming Olympic Winter Games Beijing 2022 that will be held in February next year.

ITA’s anti-doping program for Tokyo 2020 well underway, Board updated on past year’s activities