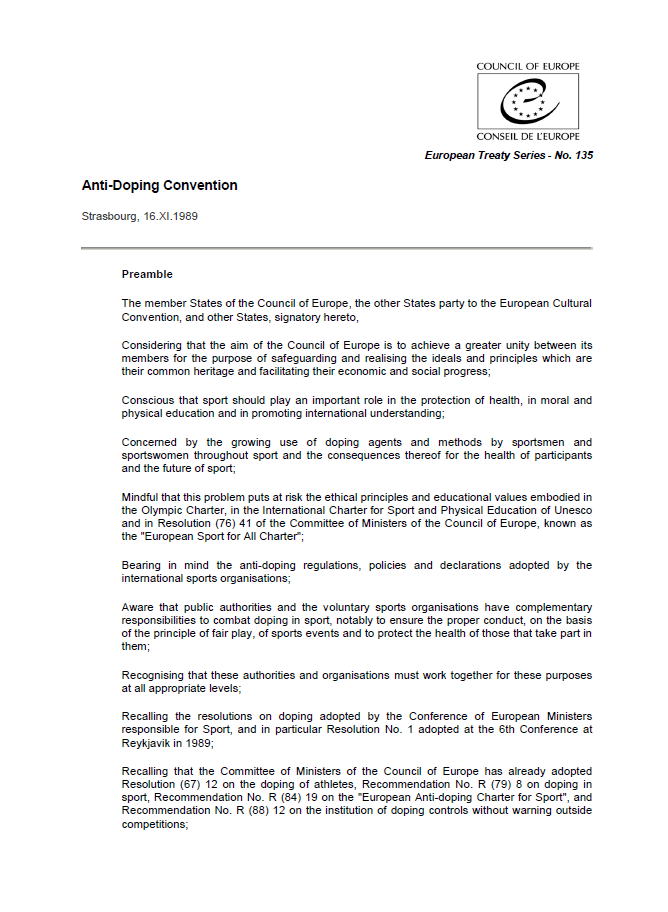 The Parties, with a view to the reduction and eventual elimination of doping in sport, undertake, within the limits of their respective constitutional provisions, the steps necessary to apply the provisions of this Convention.

The member States of the Council of Europe, the other States party to the European Cultural Convention, and other States, signatory hereto,

Considering that the aim of the Council of Europe is to achieve a greater unity between its members for the purpose of safeguarding and realising the ideals and principles which are their common heritage and facilitating their economic and social progress;

Conscious that sport should play an important role in the protection of health, in moral and physical education and in promoting international understanding;

Concerned by the growing use of doping agents and methods by sportsmen and sportswomen throughout sport and the consequences thereof for the health of participants and the future of sport;

Mindful that this problem puts at risk the ethical principles and educational values embodied in the Olympic Charter, in the International Charter for Sport and Physical Education of Unesco and in Resolution (76) 41 of the Committee of Ministers of the Council of Europe, known as the “European Sport for All Charter”;

Bearing in mind the anti-doping regulations, policies and declarations adopted by the international sports organisations;

Aware that public authorities and the voluntary sports organisations have complementary responsibilities to combat doping in sport, notably to ensure the proper conduct, on the basis of the principle of fair play, of sports events and to protect the health of those that take part in them;

Recognising that these authorities and organisations must work together for these purposes at all appropriate levels;

Recalling the resolutions on doping adopted by the Conference of European Ministers responsible for Sport, and in particular Resolution No. 1 adopted at the 6th Conference at Reykjavik in 1989;

Recalling Recommendation No. 5 on doping adopted by the 2nd International Conference of Ministers and Senior Officials responsible for Sport and Physical Education organised by Unesco at Moscow (1988);

Determined however to take further and stronger co-operative action aimed at the reduction and eventual elimination of doping in sport using as a basis the ethical values and practical measures contained in those instruments,

Have agreed as follows in Article 1-19:

International Convention Against Doping in Sport