International Convention Against Doping in Sport 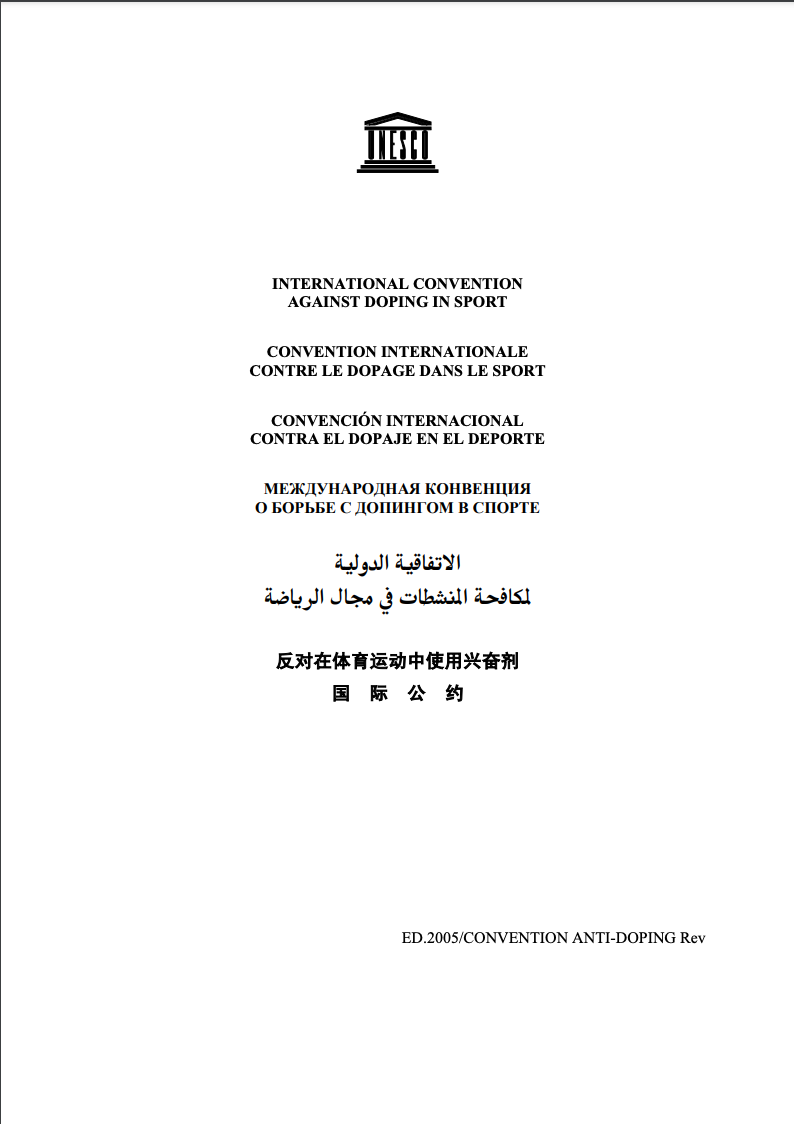 The purpose of this Convention, within the framework of the strategy and programme of activities of UNESCO in the area of physical education and sport, is to promote the prevention of and the fight against doping in sport, with a view to its elimination.

The General Conference of the United Nations Educational, Scientific and Cultural Organization, hereinafter referred to as “UNESCO”, meeting in Paris, from 3 to 21 October 2005, at its 33rd session,

Considering that the aim of UNESCO is to contribute to peace and security by promoting collaboration among nations through education, science and culture,

Aware of resolution 58/5 adopted by the General Assembly of the United Nations on 3 November 2003, concerning sport as a means to promote education, health, development and peace, notably its paragraph 7,

Conscious that sport should play an important role in the protection of health, in moral, cultural and physical education and in promoting international understanding and peace,

Noting the need to encourage and coordinate international cooperation towards the elimination of doping in sport,

Concerned by the use of doping by athletes in sport and the consequences thereof for their health, the principle of fair play, the elimination of cheating and the future of sport,

Mindful that doping puts at risk the ethical principles and educational values embodied in the International Charter of Physical Education and Sport of UNESCO and in the Olympic Charter,

Recalling that the Anti-Doping Convention and its Additional Protocol adopted within the framework of the Council of Europe are the public international law tools which are at the origin of national anti-doping policies and of intergovernmental cooperation,

Recalling the recommendations on doping adopted by the second, third and fourth International Conferences of Ministers and Senior Officials Responsible for Physical Education and Sport organized by UNESCO at Moscow (1988), Punta del Este (1999) and Athens (2004) and 32 C/Resolution 9 adopted by the General Conference of UNESCO at its 32nd session (2003),

Mindful also of the influence that elite athletes have on youth,

Aware of the ongoing need to conduct and promote research with the objectives of improving detection of doping and better understanding of the factors affecting use in order for prevention strategies to be most effective,

Aware also of the importance of ongoing education of athletes, athlete support personnel and the community at large in preventing doping, – 2 –

Mindful of the need to build the capacity of States Parties to implement anti-doping programmes,

Aware that public authorities and the organizations responsible for sport have complementary responsibilities to prevent and combat doping in sport, notably to ensure the proper conduct, on the basis of the principle of fair play, of sports events and to protect the health of those that take part in them,

Recognizing that these authorities and organizations must work together for these purposes, ensuring the highest degree of independence and transparency at all appropriate levels, Determined to take further and stronger cooperative action aimed at the elimination of doping in sport, Recognizing that the elimination of doping in sport is dependent in part upon progressive harmonization of anti-doping standards and practices in sport and cooperation at the national and global levels,

Adopts this Convention on this nineteenth day of October 2005.

Together for clean sport: ITA enters partnership with UNESCO