The ITA Foundation Board looks back at 2022, elects Olympian Emma Terho as new Board member representing athletes

The International Testing Agency (ITA) held its 11th Foundation Board meeting in December 2022. The members of the ITA Board took stock of the organisation's activities during 2022. As the ITA also completed its first Olympic cycle, the Board approved a new strategic plan for the period 2023-2026 to be launched at the beginning of the new year.

The ITA Foundation Board met for the 11th time in December 2022 since the establishment of the independent anti-doping body in July 2018. Led by the Chair of the ITA Foundation Board, former French Sports minister Dr Valérie Fourneyron, the Board Members took stock of the organisation’s achievements and developments in 2022 based on a report by ITA Director General Benjamin Cohen.

The ITA completed its first Olympic cycle in 2022 and delivered in the first four years of its existence not only independent clean sport activities for over 50 International Federations (IFs), but also the most comprehensive anti-doping programs for both the Summer and Winter Olympic Games. The quality of these programs for Tokyo 2020 and Beijing 2022 was supported by the very positive World Anti-Doping Agency (WADA) Independent Observer (IO) reports. In addition to this, the ITA also delivered for the first time anti-doping activities for the World Games Birmingham 2022, followed by another encouraging IO report. With these successful missions for major events, the tools and innovations developed for large-scale anti-doping operations and the expertise gained over the past years, the ITA is ready to protect fair play at upcoming international competitions, such as the Asian and European Games 2023, the Olympic Games Paris 2024, the Olympic Winter Games Milano-Cortina 2026 and, of course, the Winter and Summer Youth Olympics Gangwon 2024 and Dakar 2026, with a focus on education and prevention for the young generation of high-level athletes. 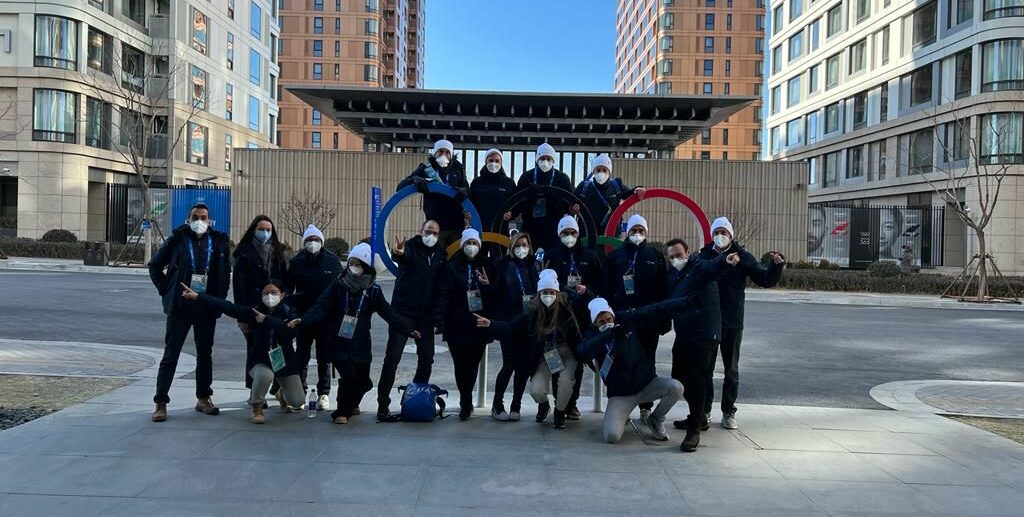 The Board noted the ITA’s impressive growth and progress in providing anti-doping programs for its partners. They also noted that in 2022 the agency has been focusing on enhancing efficiency and digitisation of operations, which are all integrated into the ITA’s Protecting Athletes & Sport System (PASS). In addition, the priority to further establish the ITA’s Intelligence & Investigations (I&I) department was highlighted, as it will aid in the organisation’s information-gathering and -sharing capacities, data analysis, open-source data collections, and confidential witness and informant handling.

In 2022, the ITA also further invested in the training of anti-doping workforce worldwide, with the launch of two new training programs: the ITA Doping Control Officer Foundation Training and the ITA International Clean Sport Educator Program. In addition to this, the Shanghai University of Sport was designated as the first ITA Academic Centre with the aim to foster and promote professional expertise in the fields of anti-doping and testing. 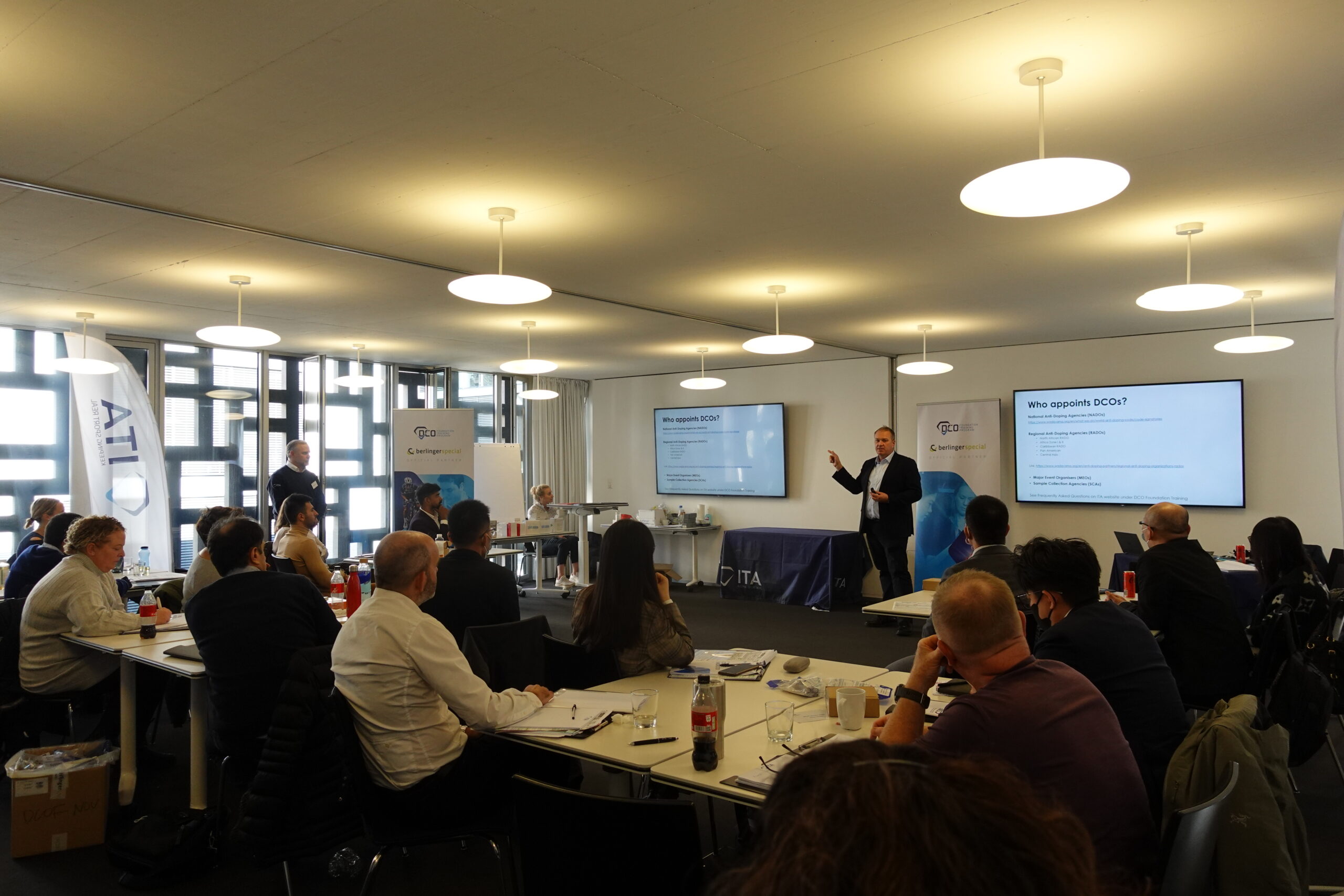 The ITA Board also took note of the high operational volumes the various departments of the agency have delivered in 2022, with a forecast of around 30’000 collected samples until the end of the year (46% of which in-competition at almost 500 international sporting events), over 500 Therapeutic Use Exemptions (TUEs) processed and over 32’000 Athlete Biological Passport (ABP) notifications received. ITA’s legal affairs department has processed almost 1’000 potential Whereabouts Failures in 2022 and has handled over 280 new potential cases of Anti-Doping Rule Violations next to continuously handling cases from previous time frames such as the Moscow Laboratory LIMS (Laboratory Information Management System) cases for 11 of its IF partners, as well as cases stemming from re-analysis projects.

The ITA’s Education Department worked for 35 IF partners and supported major events partners with various custom initiatives. The team delivered 50 event-based education activities in 2022. To absorb this high number of missions, 10 additional education ambassadors, mostly former high-level athletes, were recruited and trained. Over 10’000 athletes from 182 countries have attended an ITA webinar since the launch of this format in 2020.

ITA’s Regulatory Compliance Unit supported ITA partners through the process of the WADA Code compliance monitoring Program and will continue to do so in 2023. The ITA Foundation Board noted that for IF partners delegating their entire anti-doping program to the ITA (as opposed to those with only partial delegation) over 70% fewer corrective actions have been identified, proving the quality of anti-doping programs comprehensively led by the ITA. As compliance with the World Anti-Doping Code and its International Standards is the most important benchmark for the ITA and its partners, the ITA Foundation Board approved and supported the organisation’s official pledge (+link) to hold compliance with the Code as one of its key guiding principles.

The ITA also recently concluded the London 2012 re-analysis program, which resulted in a total of 73 new anti-doping rule violations and the subsequent withdrawal of 31 and reallocation of 46 medals by the IOC.

A further topic was the anti-doping program that the ITA is leading for the International Weightlifting Federation (IWF), both in regard to the year-round activities for weightlifting and the investigative report published in June 2022 and the following lifetime bans of former IWF officials.

With the completion of its first 4-year Olympic cycle, the ITA will also embark on a new strategic cycle in 2023. To this end, the ITA Board approved the 2023-2026 strategic plan as proposed by the ITA management. This plan was drafted with the support of external consulting firms and following extensive consultation with the Chair and members of the Foundation Board as well as the ITA’s main stakeholders such as athlete representatives, WADA, IF umbrella associations, National and International Olympic Committees and others. The new strategic plan will be officially launched in January 2023.

“Looking back at the short history of the organisation I chair, I have to say that we have come a long way in a short time,” says ITA Chair of the Foundation Board Dr Valérie Fourneyron. “What started as a start-up organisation with a handful of anti-doping experts has now become one of the largest anti-doping agencies in the world with over 80 staff. The commitment to independence and expertise has remained the same, and we continue to believe that collaboration is the key to the long-term fight against doping, a vision that is reinforced by the many partnerships the ITA forms within and outside of the anti-doping ecosystem. Many challenges lie ahead, and the new 2023-2026 strategy approved by the ITA Board has outlined them well. We will continue to build trust in ITA and its activities with all stakeholders: athletes, sports governing bodies, major event organisers, national and regional anti-doping organisations, public authorities, media and fans. I congratulate ITA Director General Benjamin Cohen and his team for a productive, challenging and rewarding year working hard to keep sport real.”

The ITA Foundation Board also elected a new Board member to join at the beginning of 2023. Emma Terho, former ice hockey professional player, five-time Olympian and two-time Olympic medallist, will join the ITA Board as athlete representative. She will replace Kirsty Coventry (OLY) in this position.

Ms Terho expressed her enthusiasm for her upcoming appointment to the ITA Board in 2023. “As an Olympian and athlete representative, I understand how vital it is for athletes to have confidence in a strong clean sport system and to be sure that everyone competing is subject to professional anti-doping measures,” she declared. “Independence is a key factor in building that trust, which is why I am committed to supporting the ITA to the best of my abilities and to further advance independence and expertise in anti-doping in the sporting world.”

Prof. Dr Uğur Erdener was re-appointed by the ITA Foundation Board as IOC representative for a last term of office of two years until January 2025. The remaining five Board members were not subject to re-appointment at the 11th ITA Board meeting. 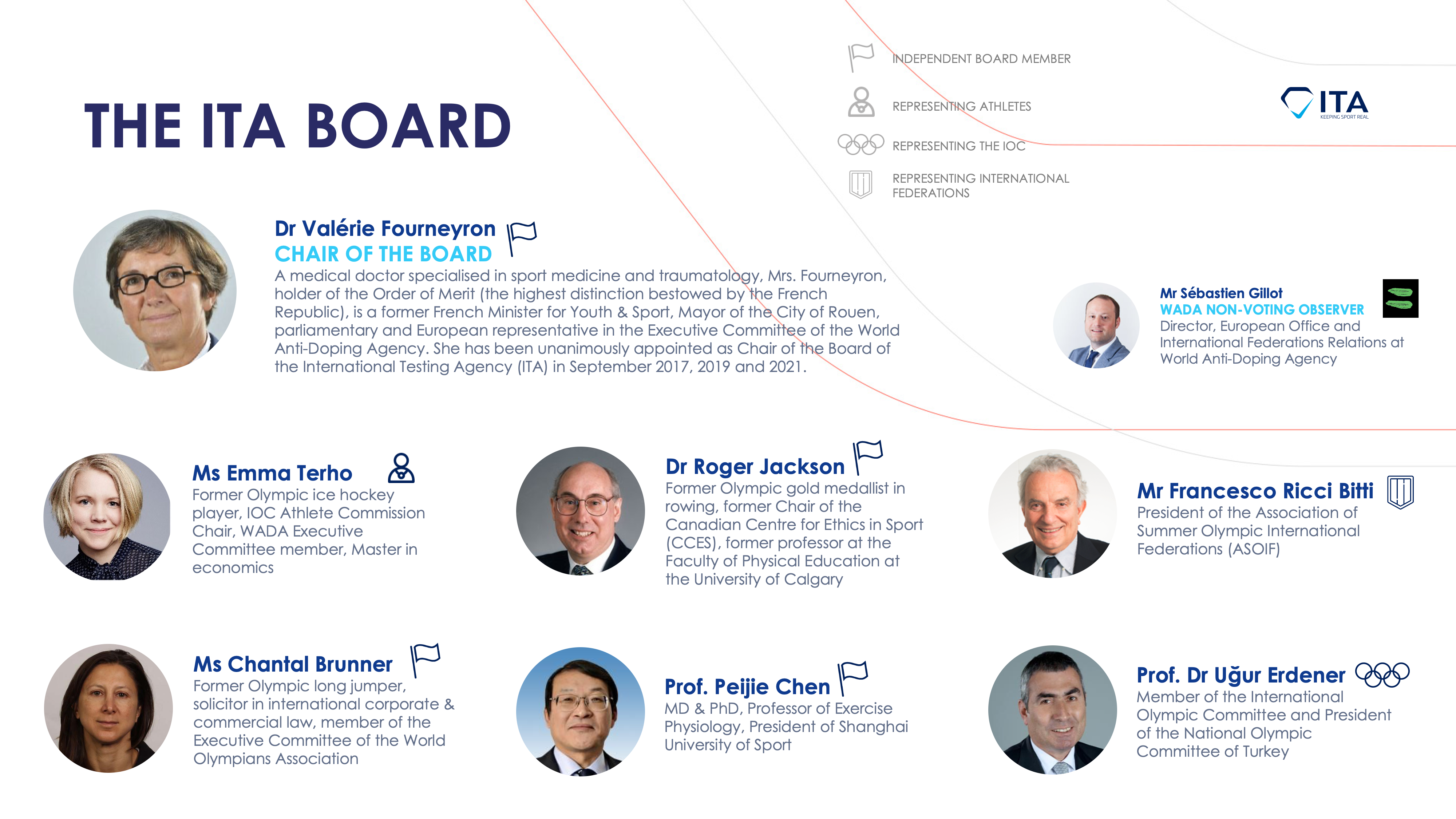 The ITA Foundation Board constitution as per 1 January 2023.

The ITA Foundation Board is constituted of a majority of four independent members, with three members representing the ITA’s major stakeholders (athletes, International Federations and the IOC) to ensure balanced decision-making. A representative of WADA sits in all board meetings as Observer. ITA Board members are appointed for a maximum of four terms of two years. The ITA Board is mainly competent to propose amendments to the ITA Statutes, to appoint and remove the ITA Director General as well as the external financial auditors. The ITA Board is required to safeguard the independence of the ITA, in particular its operational independence and transparency. The ITA Board delegates all operational competencies to the Director General to ensure a clear division of responsibilities and to fully preserve the integrity of the ITA programs.