ITA Board Meeting: growth and performance despite a challenging year

The Board of the ITA met virtually on 3 November for an update on the activities and challenges of the very eventful year 2020, but also to discuss the future of the rapidly developing organisation.

ITA Director General Benjamin Cohen updated the Board on the most recent developments and projects, but also took stock of the effects the difficult year 2020 had on the organisation. As the repercussions caused by the COVID-19 pandemic on the sports community have been vast, they also impacted the ITA. Sample collection nearly came to a halt during the springtime, and the postponement of the Tokyo 2020 Olympic Games caused many logistical and organisational challenges. However, in the face of these adversities, all possible strategies and resources have been put in place to stay true to ITA’s mission of keeping sport real.

“Despite these dire circumstances”, notes ITA Chair Dr Valérie Fourneyron, “I want to congratulate the entire ITA team on the work done this year that had started successfully with the management of the Lausanne 2020 Winter Youth Olympic Games, but then the promising trajectory rapidly changed due to the coronavirus. They have quickly adapted to the new circumstances and worked tirelessly to maintain the integrity and quality of our partners’ anti-doping programmes, even when testing capacity was reduced, and were able to catch up significantly during the summer. Many important partnerships were established – for instance with the International Hockey Federation (FIH) and the World Squash Federation (WSF), and with a considerable number of NADOs. Major projects for the organisation, such as the ITA IDCO training & certification program, clean sport education programs and the centralized long-term storage of samples were successfully implemented. The ITA is entering a crucial year with the management of two Olympic events close together – Tokyo 2020 and Beijing 2022 – but I am deeply convinced by the organisations’ track record so far that it is ready to face these and other upcoming challenges.”

The ITA Board was also updated on the status of the anti-doping programs for these Olympic events, specifically on the anti-doping program for Tokyo 2020. The postponement of the Games required many adaptations, a review of the initial risk assessment and testing plan as well as a re-launch of the work of the ITA Pre-Games Expert Group, which will issue its first wave of recommendations to NADOs and summer IFs shortly, with the objective of closing testing gaps ahead of the event.

The largest of the partnerships concluded in 2020, that with the International Cycling Federation UCI, which will integrate the majority of the cycling anti-doping experts currently working for the Cycling Anti-Doping Foundation (CADF) into the ITA, is well on track. The ITA has worked throughout the year to prepare for this integration – from a legal and HR perspective, but also regarding IT tools, data infrastructure and testing processes – and looks forward to welcoming 11 new employees in January 2021 who will form the new ITA Cycling Unit and be supported by all other ITA Departments.

Also worth mentioning is the work done by the ITA in the area of results management. In addition to handling Anti-Doping Rule Violations (ADRVs) for almost 20 of its partner federations and major event organizers, the ITA managed an extensive amount of complex cases stemming from the IWF McLaren report and the LIMS database, as well as the finalisation of the London 2012 Olympic Games re-analysis program delegated by the IOC that brought to light a significant amount of ADRVs. As of today, the ITA is processing and prosecuting more than 200 potential ADRVs.

Another important step for the ITA was the preparation, audit and successful obtainment of the ISO 27001 certification, an international standard on responsible management of information security – ensuring a secure handling of data assets of the ITA on behalf of its partners.

The Board further took note of the 2020 budget and actuals of the ITA, which were adapted to the impacts caused by the pandemic. It also ratified the budget for 2021.

This was the first meeting of the ITA Board with a majority of independent members, as Chantal Brunner and Roger Jackson, two Olympians newly appointed in June after a vetting and ratification process by the WADA Executive Committee, made their debut in their new board roles. The existing board members Mrs Kirsty Coventry and Prof Dr Uğur Erdener were re-appointed for a new term of two years.

“Attending my first ITA board meeting made me realise how far this young organisation has come since its foundation and how mature it already is”, says Dr Roger Jackson. “The scope of activities and projects is vast – next to protecting clean sport for its 45 IF and MEO partners, the ITA is involved in a series of projects aiming at innovating anti-doping efforts. The ITA is, for instance, on the steering committee of the Dry-Blood-Spot testing project, and it has also developed unique sports physiology profiles for a more refined doping risk assessment. I believe that the current composition of the board has the right balance of independence, expertise and background knowledge for a harmonised governance of the Foundation.”

CONSTITUTION AND ROLE OF THE ITA FOUNDATION BOARD

The ITA Board is constituted of seven members (including the Chair of the Board) and an ex-officio, non-voting WADA observer. It acts as a supervisory body of the ITA. The ITA Director General is appointed by the ITA Board and has the overall responsibility of the operational running and management of the ITA, the conduct of all its activities and the actual administration of its assets. 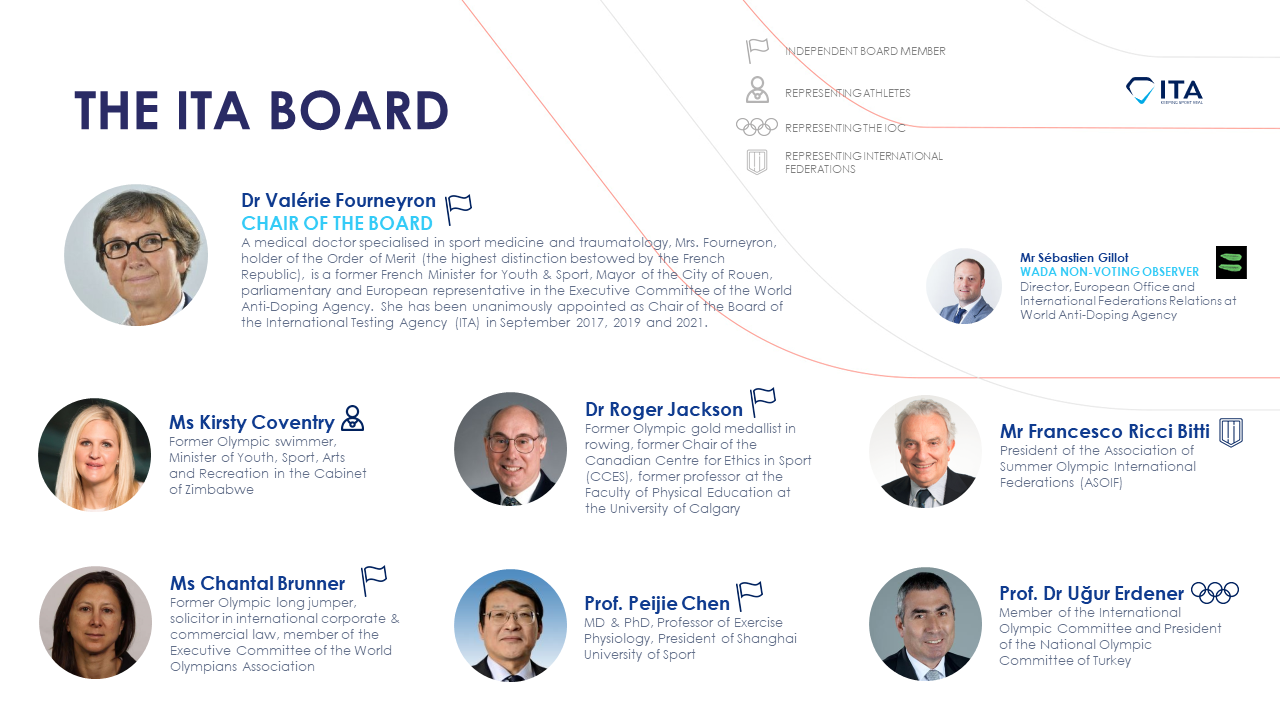