Today marks a key milestone in ITA’s life as it celebrates its first year anniversary since the official launch of its operations.

Last week, the Chair of ITA’s Board and former Sports Minister of France, Dr Valérie Fourneyron was invited to deliver an activity report to the IOC Session which took place in Lausanne from 24 to 26 June 2019 and update the Olympic Movement on the progress made by the ITA over this past year of operations.

• ITA’s work in the management of the Anti-Doping Program of the 2018 Youth Olympic Games in Buenos Aires, Argentina and the good cooperation with the Argentinean Local Organizing Committee, its National Anti-doping Agency and the Rio de Janeiro laboratory of Anti-Doping analysis;

• ITA’s management of the reanalysis program of the 2012 London Summer Olympic Games with more than 2500 samples reanalyzed and the prosecution of all positive cases resulting thereof;

• The signature of more than 40 partnerships with international sport organizations that have delegated to the ITA the management of all or part of their anti-doping program;

• The assistance provided to a number of International Sport Federations with their compliance obligations under the World Anti-Doping Code;

• The cooperation initiated with a number of National Anti-Doping Organizations to foster synergies between national and international level anti-doping programs as well as the sharing of information and expertise in the areas of testing, intelligence, Athlete Biological passports and education, among others;

• The planning of more than 12’000 Anti-Doping controls to be implemented throughout 2019;

• The assistance provided to the International Federation of University Sports (FISU) and the local organizing Committee of the 2019 Krasnoyarsk Winter Universiade with the coordination of their anti-doping program;

• The recruitment of more than 30 anti-doping specialists representing 17 nationalities to support ITA’s partners and activities;

• The establishment of an ITA Expert Group (composed of ITA experts and representatives of summer Olympic International Federations and National Anti-Doping Organisations) supervising Pre-Games anti-doping activities in the lead up to the Tokyo 2020 Summer Olympic Games.

In this regard, the ITA Chair Dr Fourneyron stated: “While the Board that I chair is not involved in ITA’s day-to-day operations with the view to maintain a strict separation between the Board and ITA’s operations, I am absolutely delighted to see the tremendous progress made by the ITA team under the leadership of its Director-General Mr Benjamin Cohen in such a short period of time. The ITA has demonstrated openness in cooperating with all anti-doping stakeholders for the good of the fight against doping and our athletes and what I am seeing is extremely encouraging for the future”.

Further, on Thursday 27 June 2019, the ITA held its Board meeting at the ITA HQ in Lausanne, Switzerland.

In addition to approving the 2018 audited financial accounts (to be published shortly on ITA’s website) and renewing the mandate of two ITA Board members whose initial mandate of one year had come to a term (Mrs Kirsty Coventry and Prof. Dr Ugur Erdener), the ITA Board took an extremely important decision to further strengthen ITA’s independence.

Recognizing that the ITA has been established to contribute to the standardization of testing programs across sports and regions but also to ensuring that anti-doping programs of sports bodies are conducted without any real or perceived conflict of interests, the ITA Board unanimously voted an amendment to the ITA Statutes to increase independence within the governance of the ITA.

As a result, the ITA Board approved the addition, by the end of 2020 at the latest, of two independent members in its Board in order to create a majority of independent members. The World Anti-Doping Agency (WADA) will continue to have a seat in the Board of ITA as a non-voting ex officio position. The Board will therefore be composed of seven individuals as follows:

• Four independent members (one of them being the Chair of the Board) not representing any organizations or constituencies;

A consultation process will now begin to identify these two new independent members who shall have proven expertise in the field of anti-doping and/or other areas of relevance to the achievement of the objectives of the Foundation as per Article 4 of the ITA Statutes. These two candidates will be submitted to an ad-hoc Nomination Committee appointed by WADA to review the professional and ethical qualifications of the candidates. This ad-hoc committee will provide a non-binding recommendation to the WADA Executive Committee for formal approval of the two candidates.

Dr Fourneyron continued: “I fully support this decision which will further promote the notion of independence of our Foundation. We will also benefit from additional expertise within the Board. This additional independence and expertise will assuredly strengthen the ITA and allow it to fulfil its objectives in everyone’s interest, the athletes in particular”. 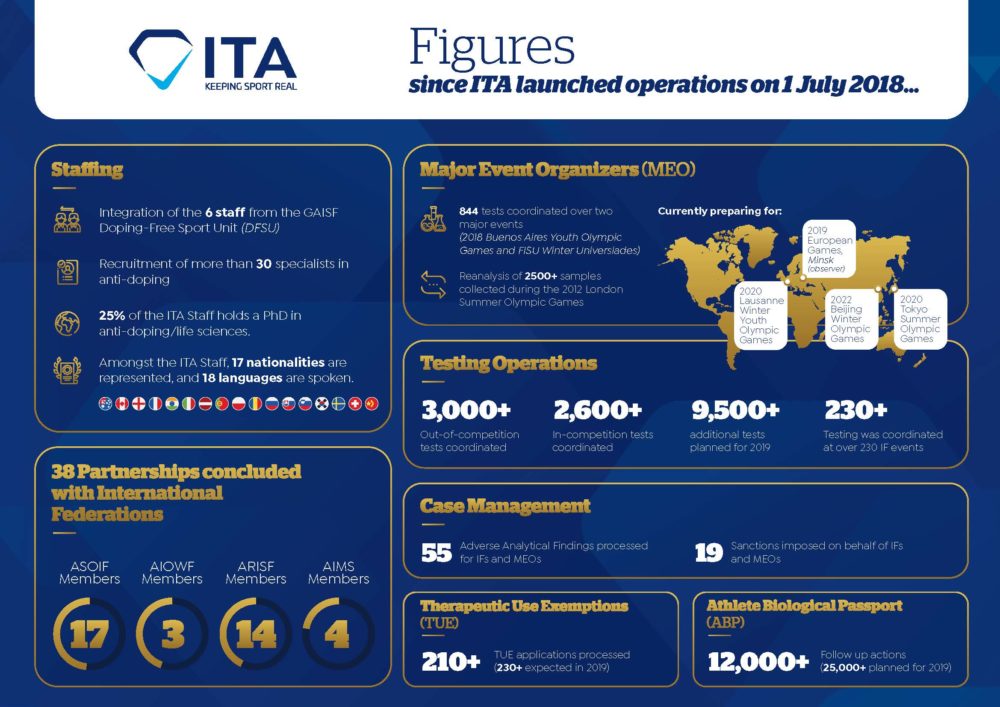 ITA Board Meeting: growth and performance despite a challenging year