The ITA is leading an independent anti-doping program for the Olympic Games Tokyo 2020 on behalf of the International Olympic Committee (IOC).

Long-Term Storage – samples of ADOs participating in the LTS program are stored in a centralised facility, as well as all samples collected by the ITA during Games-time

The International Testing Agency (ITA), leading an independent anti-doping program for the Olympic Games Tokyo 2020, concludes an eight-month-long comprehensive pre-Games program in the lead-up to the event and reports a high testing implementation rate of 80% on recommendations for qualified athletes. This program is a collaborative effort between the ITA, National and Regional Anti-Doping Organisations and International Olympic Summer Federations and demonstrates a global motivation to ensure a level-playing field in the run-up to the Games. It constitutes the most extensive anti-doping program ever implemented ahead of an edition of the Olympic Games.

Since the testing recommendations were shared with the relevant organisations in December 2020, the ITA Expert Group has been regularly coming together to monitor their implementation, which was documented via a specifically designed digital sharing platform. Now, very close to the start of the Olympic Games, this first phase of the anti-doping program has been completed with a testing implementation rate of 80% on athletes that qualified for Tokyo 2020. This high outcome rate proves the motivation and willingness of anti-doping organisations across the globe to contribute to the common goal of a robust pre-Games testing framework despite the many challenges caused by the COVID-19 pandemic. Furthermore, following a final monitoring session in the beginning of July, the ITA pre-Games Expert Group has shared additional testing recommendations with the ITA for more than 2’500 athletes across all sports that will flow into ITA’s Games-time test distribution plan to continue to avoid any potential gaps.

As the Olympic Games Tokyo 2020 draw closer, the ITA pre-Games anti-doping program is entering its final phase. The current status shows that the implementation of the recommendations to close worldwide testing gaps on athletes participating in the Games is advancing, with a pick-up of testing activities expected to happen in the weeks leading up to the opening of the Olympic Village.

Coordinated by the ITA, the pre-Games program is a collaborative effort between the International Olympic Committee (IOC), the World Anti-Doping Agency (WADA), International Summer Olympic Federations (IFs), and National/Regional Anti-Doping Organisations (NADOs/RADOs) to ensure that testing gaps are detected and addressed ahead of the Olympic Games Tokyo 2020. The work on this program began in 2019 when the ITA Pre-Games Expert Group consisting of a pool of specialists from International Federations (IFs) – representing both team and individual sports – and National and Regional Anti-Doping Organisations (NADOs/RADOs) representing all five world continents was formed (please see the composition of the group below).

The group is responsible for reviewing available information on athletes who are likely to compete in the Games. It performs a risk assessment and shares testing recommendations with other anti-doping organisations (ADOs) to ensure that effective testing is conducted globally through a coordinated effort.

In December 2020, after updating the pre-Games risk assessment and re-calibrating its efforts after the postponement of Tokyo 2020, the group issued around 26’000 testing recommendations. This high number of recommendations is due to the fact that all 33 participating sports underwent review, and that they were issued more than six months prior to the event when the pool of potentially participating athletes had not been finalised. The review of all participating sports and the early issuing of the recommendations make this the most extensive pre-Games anti-doping program ever implemented for an edition of the Olympic Games. For comparison, the pre-Games anti-doping program for the last Summer Olympics in Rio started one month prior to the event and was comprised of 1’500 recommendations for 7 at-risk disciplines.

The ITA Pre-Games Expert Group has been monitoring the worldwide implementation of the recommendations on a dedicated platform on which all ADOs can share information about qualifications and the tests they had planned. A little more than a month before the pre-Games program ends with the opening of the Olympic Village, recommendations have been followed with at least one doping control for more than 75% for athletes and teams likely going to the Games*. Testing activity continues in the weeks leading up to the Games, and so these figures are expected to improve.

Furthermore, as the IOC and the ITA have secured an extended testing jurisdiction for the IOC allowing for additional testing to take place two months ahead of Tokyo 2020, the ITA is currently also directly filling potential testing gaps through doping controls on its own initiative.

As an additional deterrent effect for those tempted to use prohibited substances, the ITA continues to offer all interested ADOs, with the support of WADA, the opportunity to store samples collected before the Games in its Centralised Long-Term Storage Facility (CLTSF) that was set up through a dedicated IOC-fund. This allows for samples to be re-analysed for up to 10 years. 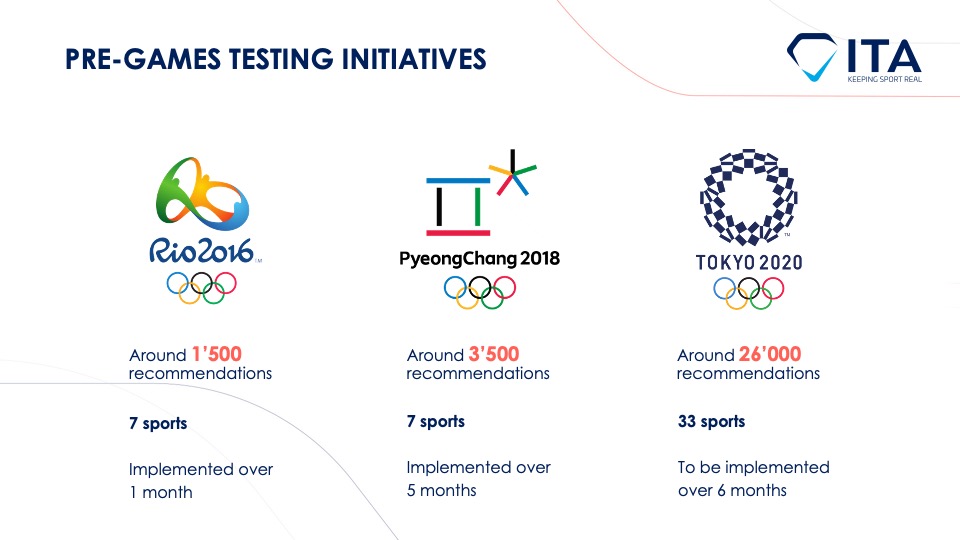 In May 2021, the ITA has signed collaboration agreements with governmental agencies in Japan in order to facilitate the exchange of information connected to potential doping offences concerning the Olympic Games.

To further ensure the implementation of an effective and robust anti-doping program and the sharing of relevant information on potential doping violations, the ITA entered into an official cooperation with the relevant Japanese governmental agencies together with the Tokyo 2020 Organising Committee and JADA.

In order to facilitate the exchange of information related to possible anti-doping violations, the ITA and all entities that have signed the MoC recognise the importance of close cooperation in the area of intelligence and investigations. All parties involved are fully committed to ensuring that the Games are clean and that all available measures can be taken swiftly should the use or trafficking of banned substances or methods be discovered in the context of the Olympic Games Tokyo 2020.

Under this new MoC, the ITA will be able to count on the full support of Japan Sport Agency (JSA) of the Ministry of Education, Culture, Sports, Science and Technology (MEXT), the Japan Sport Council (JSC), JADA, and the Tokyo 2020 Organising Committee, in relation to intelligence and anti-doping activities in connection with the Olympic Games Tokyo 2020. The ITA will also share any available intelligence with the Japanese authorities to allow them to fulfil their mandate under Japanese Law and the UNESCO Convention Against Doping in Sport.

The ITA has been entrusted by the IOC and with the full support of the World Anti-Doping Agency (WADA) to roll out and manage a global long-term storage and re-analysis program. This follows the successful discovery of a high number of anti-doping rule violations through previous re-analysis projects. Samples from the Olympic Games Tokyo 2020 and all other subsequent Olympic Games will be retained in a dedicated facility for further analysis.

Long-term storage (LTS) of samples has emerged as one of the most impactful strategies to protect clean athletes and deter doping over the past decade. Today, under the World Anti-Doping Code, samples can be stored for up to 10 years after their initial analysis and still retain the same legal impact if re-tested and prosecuted. This allows them to be re-analysed for previously undetected substances, should scientific breakthroughs enable new technologies and analysis methods.

LTS and further analysis is also part of the global anti-doping strategy of the International Olympic Committee (IOC) and a requirement of the International Standard for Testing and Investigations to have such a strategy documented. The further analysis of samples collected during Beijing 2008 and London 2012 has so far produced over 130 Anti-Doping Rule Violations (ADRVs), which clearly highlights the effectiveness of such a program to provide dissuasion and the ability to further detect cheating. Therefore, the IOC had announced during the World Anti-Doping Conference in Katowice in November 2019 to dedicate a budget to develop a global LTS program and to provide a systematic approach to enable International Federations (IFs) and National Anti-Doping Organisations (NADOs) to store their samples collected prior to the Games at no additional cost.

Tasked with the development and management of this global program, the ITA has established a highly secured Centralised Long-Term Storage Facility (CLTSF) which is now operational and ready to receive samples. All summer IFs and NADOs are encouraged to store samples collected during the time leading up to Tokyo 2020 and any following Olympic event (‘pre-Games period’) to the CLTSF with the support of the ITA, who will coordinate the shipment, referencing and storage of the samples. In complement with the work done by the ITA Tokyo 2020 Pre-Games Expert Group, which issues recommendations to participating IFs and NADOs to close possible testing gaps ahead of the Games, this will constitute the most extensive pre-Games anti-doping program ever implemented.

Organisations storing their samples in ITA’s facility retain ownership and authority over them and can request re-analysis at any time – in that case, the ITA would arrange a transfer of the sample to a designated WADA-accredited laboratory. For this initiative to be a success, close cooperation between the ITA and all WADA-accredited laboratories involved is essential.

Before the pre-Games period, the ITA presented the detailed plans and processes of the Tokyo 2020 anti-doping program to make sure that all involved parties – the Beijing Organizing Committee for the Olympic Games (BOCOG), the National Olympic Committees (NOCs), the Chefs de Mission etc. – receive all necessary information regarding all clean sport activities at the Games. 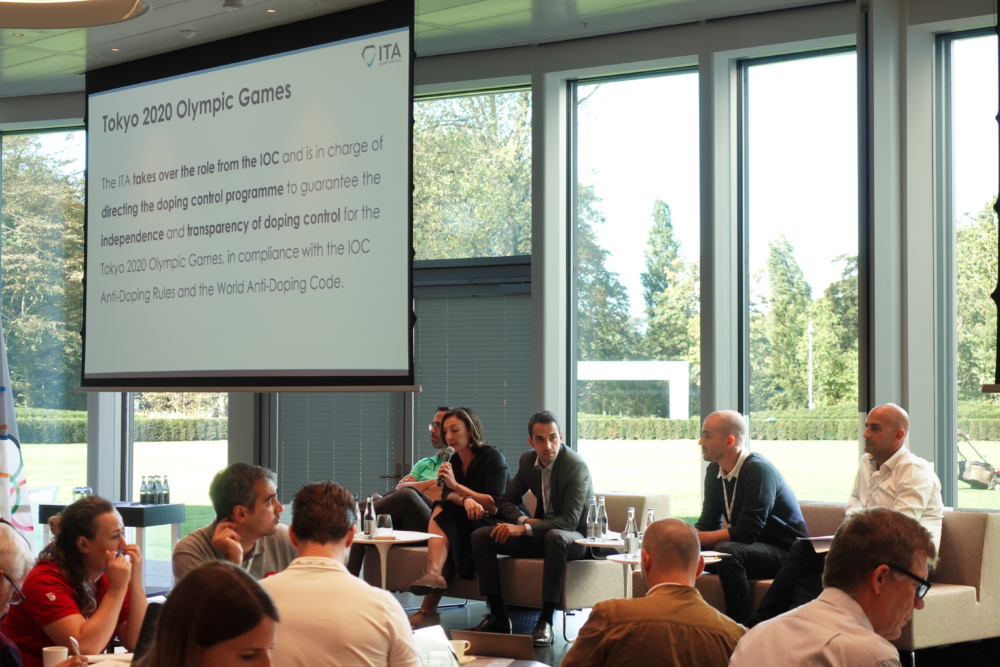 Delegates of the ITA team are briefing representatives of National Olympic Committees participating in the Tokyo 2020 Games on the anti-doping program.

Back on the road to Tokyo: ITA Pre-Games Expert Group takes up work to close testing gaps ahead of the Games