Strengthening anti-doping at the national level: the ITA enters into an agreement with the French authorities

The International Testing Agency (ITA) has signed a Memorandum of Understanding (MoU) with the French Office Central de Lutte contre les Atteintes à l’Environnement et à la Santé Publique – short OCLAESP – with the objective to increase the efficiency of information exchange in the pursuit of uncovering doping offences in France.

The ITA has already been collaborating extensively with the OCLAESP in the past, in particular within the framework of the anti-doping program it has been leading for cycling since January 2021. The signing of the MoU officialises and extends the partnership between the French government body and the independent anti-doping organisation to all the sports the ITA is leading anti-doping programs for and with a particular focus on the upcoming Olympic Games Paris 2024.

The OCLAESP is a central judicial police office, attached to the General Directorate of the Gendarmerie Nationale (DGGN). It is responsible for combating environmental and public health offences, including doping. It is made up of gendarmerie officers, police officers and technical advisors from the Ministries of the Environment, Health and Sports. The missions of the OCLAESP are to lead and coordinate judicial police investigations relating to doping offences, to gather intelligence on potential perpetrators and accomplices, to centralise and share information on doping infringements, to assist the national police units in relation to such cases and to support training and information activities in its fields of competence. 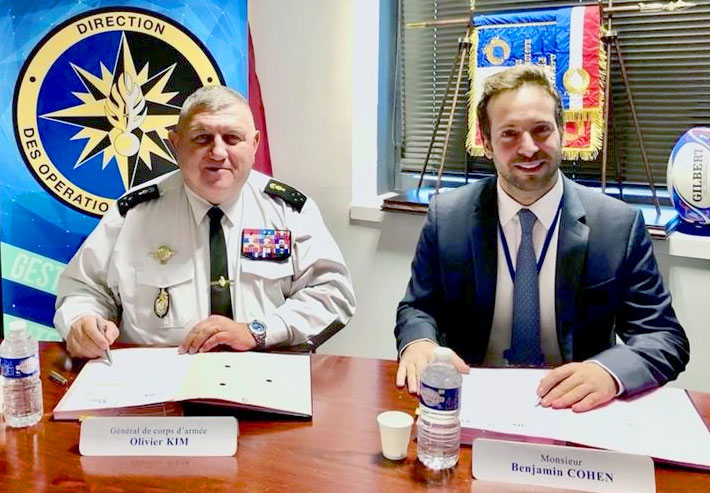 General Olivier Kim and ITA Director General Benjamin Cohen at the signing ceremony of the Memorandum of Understanding between the OCLAESP and the ITA.

The main objective of the establishment of the cooperation between the ITA and OCLAESP is to render the fight against doping and the trafficking of prohibited substances, as defined by the World Anti-Doping Code and sanctioned in France by its criminal code, more efficient in regard to high-level sport. Following this objective, the MoU mainly supports information exchange between the two organisations aimed at dismantling potential doping or trafficking networks involving French nationals and/or concerning acts committed on French territory.

“The signing of this collaboration agreement between OCLAESP and the ITA today is of twofold importance,” says ITA Chair of the Foundation Board and former French Minister of Sport Dr Valérie Fourneyron. “First, it clearly shows that anti-doping efforts are only effective when they are comprehensive. Building intelligence and investigations capacities, also within the ITA, and exchanging information with relevant partners and authorities, is as much a part of anti-doping operations as testing or education. Secondly, today’s signing with OCLAESP underlines that effective anti-doping is based on effective cooperation across borders and sports with trustworthy partners. And the cooperation with national authorities and police is key when it comes to enforcing anti-doping on the ground. That is why I am very proud that today the organisation I chair and the authorities in my home country are setting an example by entering into such a partnership for clean sport. This collaboration will be particularly important as the ITA is getting ready to deliver its anti-doping program at the Paris 2024 Olympic Games in close cooperation with several other French entities.”

For General Olivier Kim, Director of Operations and Employment at the General Directorate of the National Gendarmerie, “such a collaboration can only be virtuous and full of meaning, as sport is a source of values for the majority of people. The national gendarmerie, with the OCLAESP in the forefront, is very proud to commit itself alongside world-renowned partners, such as the ITA, in the fight against doping in high-level sport in the run-up to the biggest global sporting event, the 2024 Olympic Games in Paris. This fight requires a high level of technicality, expertise and real determination to detect doping networks, investigate their activities and prevent them from carrying out their actions. This collaboration between the ITA and the OCLAESP is therefore unavoidable and even obvious to achieve these objectives. It must be borne in mind that doping, if it allows some to obtain results and titles without respecting the values of sport and Olympism, represents an enormous risk for the health of athletes. Finally, more broadly speaking, it is quite natural that the national gendarmerie recognises itself in the values of sport, commitment, effort, loyalty and cohesion.”